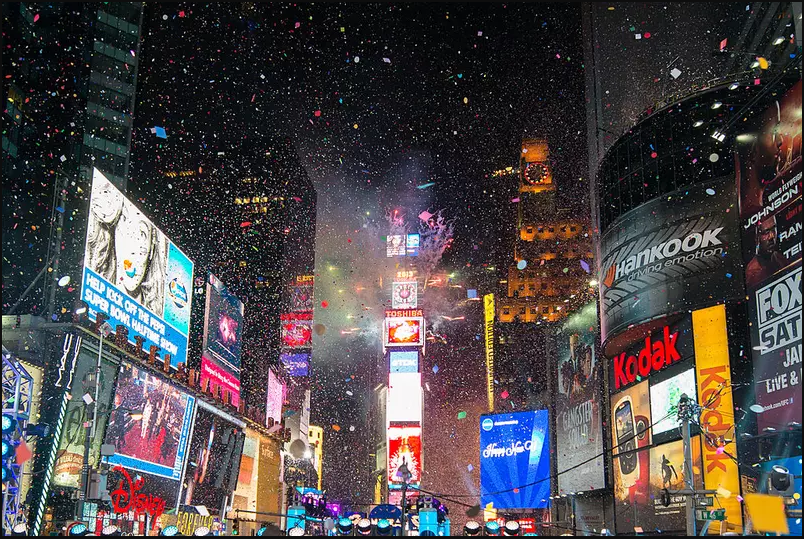 Each year in New York City, people gather together in Times Square to celebrate the New Year. You may have seen the crowd on TV because let’s be real – most of you are home, cozy in your pajamas watching all the awesome performances. You may be wondering, how can I do that? Well. Let me tell you how because I’ve done it and will never do it again.

I have personally experienced new year’s at Time Square and I’m happy to say that I’ve done it, but I will never do it again… EVER. If you’re not into crowds then I don’t think you should do it, but I do think that it is a cool thing to say I’ve done New Year’s in NYC. For those that want to take on the challenge, here are my tips on how to do New Years in Time Square and survive.

My friends and I headed into the city around 7AM thinking that was early enough and boy were we wrong! People have slept overnight on the streets in the city the night before just to make sure they can be as close to the stage as possible! You will really need to get there extremely early if you want a really good spot. Just know that the people closer to the stage made sure they could be at the front by either staying there overnight or waking up extremely early.

The reason I mention ‘limited’ is because once you’re in your spot for the occasion, you can’t leave and come back. You’ll need to make sure you are able to stand in one spot for as long as you can because you are not going anywhere. You are inside a fenced area so you most likely will lose your spot if you jump over the fence and leave. The area is heavily surrounded by police officers to ensure safety, so keep in mind that you are taking a risk if you try to leave and come back. Some people thought to bring a cooler, but something that you must keep in mind is that you won’t be able to use a restroom… which leads me to my next point.

Check out where to go eat Korean BBQ in NYC & NJ!

Now before you say.. HELL NO – let me explain. Since you won’t be able to leave your spot and if you’re hydrating yourself to make sure you don’t pass out – eventually you’ll need to pee. Now, I will say that I was pretty proud that I didn’t pee my pants but I was close. If I did have an accident, at least I knew that the adult diaper would catch my accident. This might not sound nice or appealing at all, but to be completely honest – being in Times Square for the New Year is not at all glamorous.

Usually around New Year’s, weather in NYC is extremely cold. Make sure you’re wearing tons of layers and double up on your coats. You may be a little miserable already being shoulder to shoulder with the crowd, so you definitely don’t want to make your mood even worse because you forgot to make sure you dressed appropriately.

When you’re in Times Square – you would think it’s constant music and performances, but it’s actually not. You are waiting a lot and for long periods of times. Most of the day, I had no idea what to expect or who was performing because there’s a lot of performances that are already pre-filmed and you don’t get to actually see it on the large screens. You are basically just screaming and shouting if you see a camera nearby and getting some free stuff. Because of these reasons, I think it makes more sense to go with a group of friends rather than by yourself!

How to Spend 72 Hours in New Orleans!

Majority of folks usually say that they would never do it again once they’ve already done it once. You’ll hear this a lot because unless you like be cooped up in a crowd and just waiting for the clock to strike midnight, it really isn’t a lot of people’s jam. You are not being entertained the entire day/night so it’s really not that much fun. Because this is more of a one-time thing and a novelty, make sure you take tons of photos and I mean TONS! I kind of regret not taking as many photos because when I look back, there’s really not much to show for it – so don’t make my mistake and take tons of pictures!

If you want it to be a fun time, then make your mindset about having a fun time. Sure, most of the time you’re standing in agony waiting for the clock to strike midnight – but hey, you made it and you should make the most of it. Start the new year by making this experience a positive and fun one!