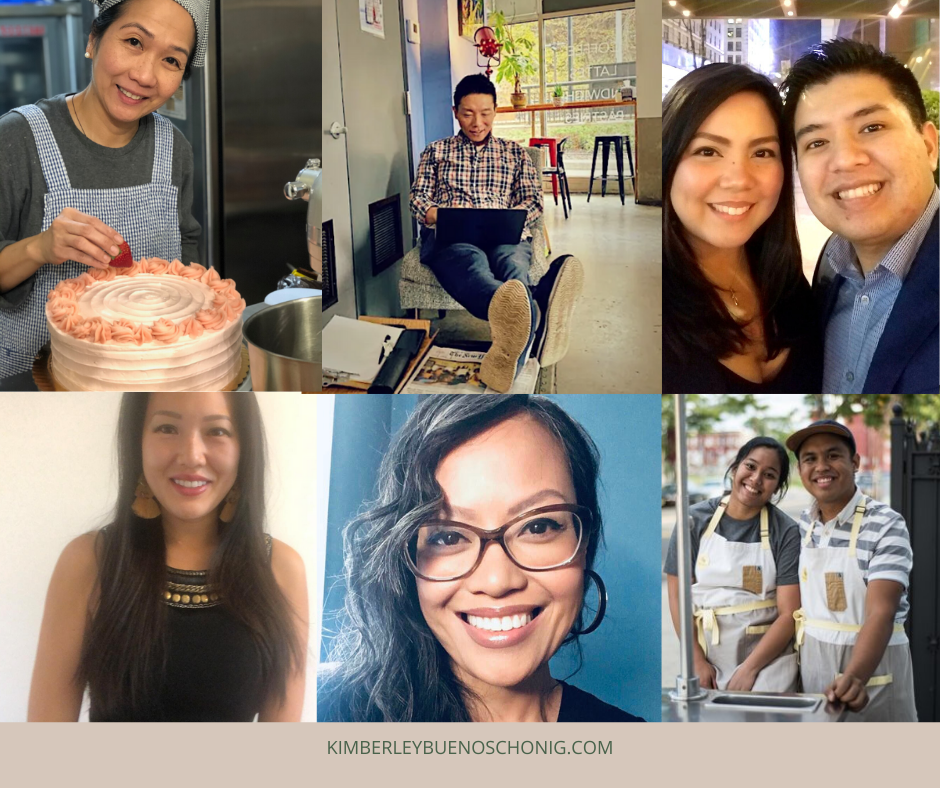 As a Filipino-American, I proudly share my heritage and my background. Before May ends, I’d like to shine a light on a few individuals that are incredibly impactful in the community. I believe they are a great inspiration to me and are great leaders in building strong united communities.

May is Asian/Pacific American Heritage Month. The Library of Congress, National Archives and Records Administration, National Endowment for the Humanities, National Gallery of Art, National Park Service, Smithsonian Institution and United States Holocaust Memorial Museum join in paying tribute to the generations of Asian and Pacific Islanders who have enriched America’s history and are instrumental in its future success.

Learn about all these inspirational individuals by reading below!

Tina Rivera is the owner and baker of Baking Mama, a small batch bakeshop located in the historic downtown of Hoboken, NJ. She started baking in 1994, a few months before her son was born. Tina was working in a bank, and the pregnancy downtime she had provided her the opportunity to learn something new– baking. She got hooked. After working for 16 years in a tech company, Tina decided to fulfill her long-time dream of baking full-time.

HeeBin and Jin both came from different backgrounds before taking over Black Rail Coffee. They were both seeking a fresh start, and now they are so pleased to have landed in a little corner of Hoboken. They both understand how hard it is to run a small business… but coming in every day to help start their customer’s day with a sandwich, or just a simple cup of coffee, seems a lot more fulfilling to them than the old 9-5. They are both looking forward to the bonds that will be built.

Elz is Deputy Director at North Star Fund, a social justice foundation that supports grassroots organizing led by communities of color in New York City and the Hudson Valley. As a daughter of immigrant Filipino parents and mother to a descendant of American slavery, Elz’ drive to confront and dismantle racism in all of its forms is a deeply personal one. Elz has worked in the nonprofit sector since 2003, holding development and communications positions at Harlem RBI, Women’s Project and Youth Speaks. Today, she is honored to serve as Board Treasurer of MADRE, an international human rights organization on the frontlines of war and disaster. Prior to the nonprofit sector, Elz spent a decade working in news radio. A native to the San Francisco Bay Area, Elz now lives in Manhattan with her partner and son.

Jennifer is the owner of Sugarsuckle, a custom cake and dessert studio in Hoboken, NJ. She was born and raised right here in Jersey, and is a second-generation Korean-American. Jennifer resigned from her corporate job and learned the fundamentals of pastry through culinary school. With her passion grounded in technique, she launched her professional career in a busy retail bakery and a Michelin-starred restaurant in NYC.  Working behind the scenes in the kitchen gave Jennifer valuable experience, insight, and refined skills, but she longed for more creativity and artistic expression. She took a break from the industry to visualize her next move and during this downtime, friends started to ask her to bake cakes for their special occasions. As the requests came in more frequently, she realized it could turn into a dessert catering business. She started to lay the groundwork for running a business by doing proper accounting (tracking income and expenses), documenting processes and creating a moodboard for the brand. She opened Sugarsuckle’s brick and mortar location in 2018. When she’s away from the studio, Jen loves spending time with her family (husband and two kids) cooking, playing board games, or watching copious amounts of TV.

Noel Do is a 2nd generation Korean American born and raised in Chicago IL. She obtained her bachelors in Finance at the University of Illinois Chicago, and her masters from New York University. She is certified in corporate financial planning and a licensed notary public for the state of New York. She has experience working in wealth management and international tax as an analyst on Wall Street. In 2015, she founded Noellery, which currently has 3 brick and motor storefronts in Hoboken, Jersey City, and Montclair, with an online presence as well.

Francia {left}, born and raised in Manila, is a Pastry Sous Chef with a decade-long professional culinary background from famous luxury hotel chains in the Philippines to Michelin-star restaurants in New York City. Ramon {right} is a Senior Advisor in Pega Practice at Ernst & Young. He graduated at the University of Santo Tomas in the Philippines. One of Francia’s dream is to open her own bakery and ice cream shop, which she could use as an avenue to slowly introduce, promote, and make Filipino pastries be known in the whole United States. Francia and Ramon is set to open their own ice cream store called Francy’s Artisanal Ice Cream sometime this year.

Trisha {left} and Lloyd {right} and they are #Baonanas.. for you! Along with their Shiba Pup, Iroh, spontaneity and adventure has followed them everywhere since we they in 2010. Other than hiking, traveling (when they can afford it!), Brazilian Jiu Jitsu, dancing, show-binging, biking, scuba diving, reading, taming dragons, and water-bending (okay maybe the last few were made up), EATING has always been a passion of theirs. Especially when it comes to dessert. They feel your pain when you scroll through Yelp, like someone repeatedly opening a fridge, hoping to find something new and exciting. They’re ecstatic to offer a game-changer in modern desserts and it’s all thanks to the support of their #BaonanaNation! Their supporters transformed their hashtag and small Instagram fundraiser into the newest dessert craze to hit the New Jersey / New York City area. Today, Trisha is an attorney fight for human rights in Labor & Employment. Lloyd is the Chief Executive Bear and is proud to lead a team of incredible, unique, and inspiring individuals.